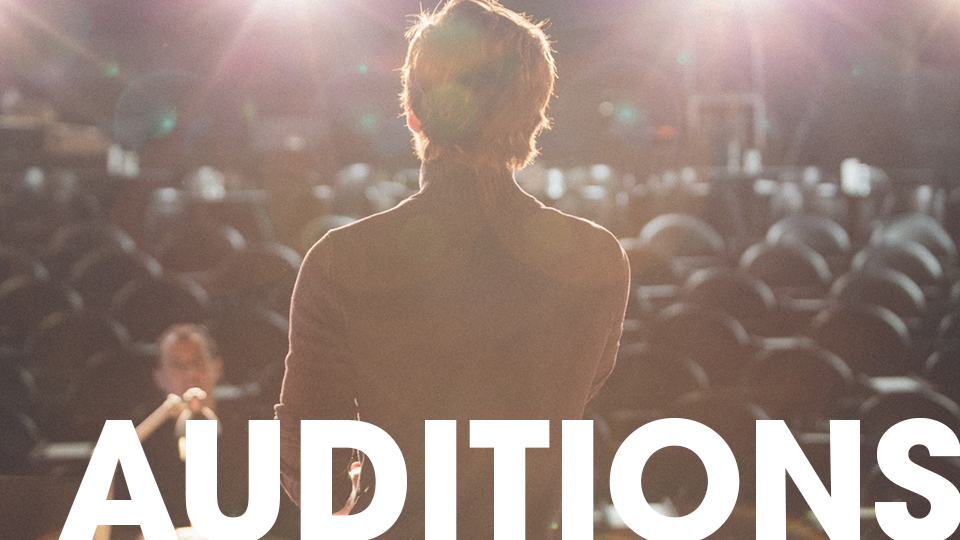 RMT has grown its artistic leadership and is thrilled to announce their 22-23 Season Auditions. This open call is for local talent who have not performed with RMT in the past. Over 50% percent of our actors last season were new to the RMT stage. If you have auditioned for us in the past, please audition again!

Seeking:
Actors with local housing for all roles in our 22-23 Season of Big Dreams! See Breakdown below.

If you have never been in a Red Mountain Theatre Mainstage production before, please begin by filling out this Google form to register prior to your arrival.

If you have performed with RMT in the past and you are interested in being considered for this season, please email casting@redmountaintheatre.org to sign up for a callback appointment (See callback date for each show below).

Local Auditions for the Season:

Bring 16 bars of a musical theatre selection or a song from any show in our season, as well as a copy of your headshot and resume.

Other:
If you are local and cannot attend the local season auditions, please a video of you singing 16-32 bars of music via link to an unlisted youtube video and your headshot and resume to casting@redmountaintheatre.org

PLEASE NOTE: We will be holding auditions for child roles at a later date, including the Kids Chorus in Joseph. To be notified, watch our Facebook and Instagram pages, or sign up to receive casting calls via email in the blue box at the top of this page. Breakdown of Characters for Dreamgirls Expand

Effie White (Female identifying, 20-35 yrs, African American, belt/soprano) Effie is the true powerhouse in the group, a soaring singer whose voice overpowers and transcends Deena’s and Lorrell’s. She is smitten with Curtis from the start and is overcome with anger and jealousy when she senses his growing attraction to Deena. Effie should be full-figured, and her size carries with it a true sense of sexuality. Must have a huge gospel belt voice. Must move very well.

Deena Jones (Female identifying, 20-35, African American, Mezzo, big full belt.) African American. The young, beautiful member of the dreams. Happy singing backup to Effie until Curtis puts her in the lead and grooms her as star of the group. Must move very well.

Lorrell Robinson (Female identifying, 20-35, African American, Soprano, on top of most triad harmony, big full belt.) The third member of The Dreams. Sexy, flirtatious girl from the projects of Detroit who has been singing with her best friends Effie and Deena for years. Carries on an affair with Jimmy Early, who refuses to leave his wife for her. Must move very well.

Curtis Taylor Jr. (Male identifying, 20-35 yrs, African American, high baritone) Handsome, and very sexy. Slick car salesman who becomes the Dreams’ manager. Has a appreciation of R & B music and a sense of what it sells. Motivated by dreams, he takes over the management of Jimmy Early’s career and also oversees the rise to stardom of The Dreams. Initially warm and approachable he becomes hardened by wealth and power and the need to control everything and everyone. Must move well. Alice Murphy (Female identifying, early 30s – 40, to play Alice at age 38) an editor of a southern literary magazine; intelligent, attractive, professional–but with an air of melancholy. The same actress will also play Young Alice at age 16: rebellious, high-spirited, sexually forward, adventurous–looking to break out of small-town life and experience the world. Must be very strong singer and comfortable in folk and bluegrass styles. Vocal range: Very strong singer with a wide vocal range.

Jimmy Ray Dobbs (Male identifying, 30 – 35) The same actor will play Jimmy Ray in his early 20s in flashbacks: Mayor Dobbs’ son and young Alice’s beau; handsome, boyishly charming, well-built, and intelligent; from a family of wealth and power and is being groomed by his father for a similar future in the family business; an independent thinker who is not afraid to stand up to his father for what he believes in; he has a sense of personal responsibility and morality as well as a deep reserve of passion and emotion. The same actor will also play an adult Jimmy Ray at age 40. Vocal range: Very strong singer in a pop-folk style. Bari-Tenor.

Mayor Josiah Dobbs (Male identifying, mid 50s – mid 60s) The Mayor of Zebulon; he’s a political and financial powerbroker – distinguished, even elegant, an imposing and controlling presence; has a genuine interest in protecting his son’s future and his family name, but in doing so, is ultimately pushed to a point of extreme and irrevocable cruelty. Vocal range: Bass-Baritone.

Lucy Grant (Female identifying early 20s – 30s) Strong actress with great comedic timing, who is a dynamic and sexy dancer. She has to have complete ease with dancing and partnering. Leads a production number. Vocal range: Strong belt.

Mama Murphy (Female identifying, 50 – mid 60s.) Warm and strong, the center of her family. A fierce protector of her daughter, who she knows is deeply gifted, but a handful. Vocal range: Open.

Daddy Cane (Male identifying, 60s) A warm, loving country man. Loves to read. Has kept a secret for many years for all the wrong reasons. Vocal range: Open.

Ensemble (variety of ages 20 – 60) All should move very well. Everyone moves scenery, is quite active throughout the entire show, and needs to be game to “move.” Seeking strong dancers as well as movers. Vocal range: Open. Breakdown of Characters for Shrek The Musical Expand

Shrek (High Baritone) Our story’s title character. A big, green, terrifying ogre who lives alone in a swamp. He embarks on a journey to rid his land of fairytale creatures and, along the way, falls in love with Fiona. Begins as a grumpy hermit, but reveals his layers and eventually becomes the hero. Excellent singer and actor.

Princess Fiona (Soprano / High Belter) The beautiful princess of Far-Far-Away, she transforms into an ogre every night when the sun sets. Rescued by Shrek and eventually falls in love with him. Quirky, blunt, and multi-talented, she is not an ordinary princess. Excellent singer and actor with great comic timing; tap dancing is a plus.

Donkey (High Baritone / Tenor) A talking donkey who joins Shrek on the run from Farquaad’s guards. Quite the chatterbox, he is not deterred by Shrek’s looks and practically forces himself into the ogre’s good graces. Easily frightened and pushy, but also an optimist with heart. Excellent singer and comic actor with a huge personality.

Lord Farquaad (High Baritone) The comically short, ruthless ruler of Duloc. He is in search of a princess to marry so that he can become king. Has an intensely unfair bias against fairytale creatures that stems from a resentment of his father. Self-absorbed, lonely, and cruel. Excellent singer and comic actor. Actor must be able to play this role on his knees for the whole show.

Pinocchio / Magic Mirror (Tenor with falsetto) The leader of the fairytale creatures. Although portrayed by a live actor, Pinocchio is an animated puppet whose nose grows every time he lies. Plenty of sass with a penchant for lying, he leads the troupe of Fairytale Creatures in the musical numbers “Story of My Life” and “Freak Flag.”

Dragon (Alto with Big Belt) A dragon that has been charged with guarding Princess Fiona in her isolated castle. She eventually falls in love with Donkey and attempts to keep him there forever. Imposing and flirtatious, but tired of her job as the glorified baby-sitter. She sings “Forever” with her Knight back-up singers.

Sugar Plum Fairy / Gingy A gingerbread man initially kidnapped by Lord Farquaad. His wit and resolution help him both avoid trouble and inspire the rest of the fairytale creatures. This character is portrayed with a puppet, which may be voiced and operated by actor appearing as Sugar Plum Fairy. Comedic voice required.

Young Fiona (Age 8 – 13, Soprano with Strong Belt) Princess Fiona as a little girl. Sings a solo in “I Know It’s Today” with Teen Fiona and Fiona.

Teen Fiona (Age 14+ , Soprano with Strong Belt) Princess Fiona as a teenager. Sings a solo in “I Know It’s Today” with Young Fiona and Fiona.

3 Little Pigs (Tenors or Baritones with ability to sing tight harmony and German Accent) Fairytale creatures with solo / trio work in “Story of My Life,” “Freak Flag” and “This is Our Story.” Breakdown of Characters for Joseph Expand

Narrator (Female identifying, Soprano/Belt) The audience’s guide through the story. The narrator tell Joseph’s story with word and song. Can command the stage while directing focus to story elements. Strong singer with great energy.

Pharaoh (Male identifying, Baritone) Egypt’s ruler, considered a god on earth. Searching for the meaning behind his/her dreams. Portrayed as a world-famous rock star. Full of energy and confidence. May also be cast as a member of the greater ensemble.

Potiphar (Male identifying, Baritone) Rich, self-indulgent, and sophisticated Egyptian capitalist. Makes Joseph the leader of his household. Strong character actor with a powerful speaking voice. May also be cast as a member of the greater ensemble.

Potiphar's Wife (Female identifying, Alto) Indulgent and confident in her pursuit of what she wants, which at this time happens to be Joseph. May also be cast as a member of the greater ensemble.

Jacob (Male identifying, Baritone) Aged father of Joseph and his 11 brothers. Strong character actor who can sing and move well.

Butler: (Male identifying, Tenor) Pharaoh’s right hand. While in jail, Joseph interprets the Butler’s dreams to a positive outcome. Will also be cast as a Brother.

Baker (Male identifying, Tenor) Head of Pharaoh’s kitchen. While in jail, Joseph interprets the Baker’s dreams to a less-than-positive outcome. Will also be cast as a Brother.

Wives: Female identifying, Various Ranges – The 11 wives of Joseph’s 11 brothers. Skilled dancers and singers. Will also double as general ensemble in some scenes.