Red Mountain Theatre Company is offering an extravaganza for the whole family, Holiday Spectacular 2018 running November 30–December 16 at the RMT Cabaret Theatre. It’s an unbelievable event of all your holiday favorites performed by Birmingham’s best local artists and the RMT Conservatory.

Long-time RMT Alum and one of the featured performers, Neal Hunter Hyde, has been involved in with the organization for 25 years. He began his time with RMT participating in a workshop and later as a cast member in a production of Mame with actress Lee Meriwether (Catwoman in the 1966 film version of Batman). “A friend had been in the cast of Joseph and the Amazing Technicolor Dreamcoat the year prior and invited me. It inspired me to join a workshop, then audition for Mame and later join the performing ensemble in the fall,” Hyde noted.

Throughout the years, Hyde has noticed several changes over the years from the organization being renamed Red Mountain Theatre Company (originally Summerfest) to the company growth under current Executive Director Keith Cromwell. Through all of the transitions, Hyde points out there are qualities that remain the same, “It has remained a place where young, creative people find their niche and hone their talent. They have the opportunity to work and befriend other young people that have common interests.” 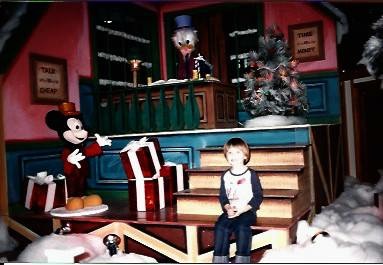 Growing up in the now-branded RMT Conservatory, he is constantly moved by the progress of RMT and the Conservatory. “It has been cool to have worked in Birmingham, regionally, and in New York City. I always come back and I am amazed to see how Birmingham and RMT have grown. I am very impressed by the quality of training for the students, the students’ professionalism, and their ability to take direction. Keith and his team have done incredible work taking the company to the next level. I am very grateful for all of the opportunities they have given me over the years,” Hyde sentimentally expressed.

Holiday Spectacular 2018 has become a seasonal tradition for friends and families in Birmingham over the years. Hyde stated, “What keeps people coming back is that they know they’re going to have a good time. They’re seeing old favorites, but also witnessing new material. It’s a little variety for everybody.” We hope you can make it part of your holiday tradition and join us at the RMT Cabaret Theatre.